For the past few years, we, and the entire large scale arena, have been closely following the continuing and twisting saga of the bankruptcy and purchase of Lehmann, the original manufacturer of LGB trains. Our first trains were LGB and it is the best-represented brand on our layout.

In 2007, the assets of Lehmann were purchased by Marklin and production slowly resumed. However, due to a trademark dispute with LGB of America, distribution to America did not return. Recently, the American distribution rights transfered to Marklin and today it became known that the distributor and servicer for LGB in the United States, Canada, and Mexico will be Walthers. Details are still scarce, but LGB should once again be available in North America early next year

Not long after we got out LGB Amtrak Genesis, one of its headlights failed. LGB sent us a replacement part and our Genesis now has perfectly working headlights. We have a new article online detailing the installation process.

The replacement headlights for our LGB Amtrak Genesis have arrived. One of the lights had died shortly after we purchased the locomotive, so we requested a replacement from LGB and they shipped us one under warranty. We will provide details of the repair process when they're available.

8.20.08 - Replacement Genesis Headlights On Their Way

A day or so after we got our new LGB Amtrak Genesis locomotive, one of its headlights stopped working. The front lights of the engine are comprised of two center white LEDs and white and red LEDs on either side. The one the broke was, when looking at the front of the locomotive, the left light in the center pair. The six LEDs appear to be soldered to a single circuit board, which has wires leading from the locomotive's main circuit board and wires leading to other lights on the front and in the cab. We have contacted LGB customer service and they are sending us a replacement under warranty. We'll post any updates and details of the installation. 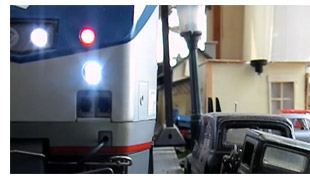 An all new movie is now online, featuring our new LGB Amtrak Genesis, two LGB Amtrak Amfleet Coaches, and LGB Amtrak Amfleet Cafe Car. This new rolling stock arrived in June 2008. Rounding out the train are the four LGB Pennsylvania Railroad coaches, the LGB RhB Sightseeing Car, the LGB State of Maine Boxcar, and the Aristocraft E&A Private Car. The train reaches a top scale speed of 70 miles per hour, or around 2.5 real miles per hour. In this new movie you can easily see our Genesis' broken headlight, the renovated Apple Store, and some recent changes to Eric's Auto.

We have created a design for the new interior of our Apple Store. Currently, the "interior" is simply a print-out of a picture of a real Apple Store placed on the front of our building. This new interior would be complete and to scale, with LED lighting and made mostly from balsa wood. The mock-ups above show what we would like to accomplish. It turns out that this is quite a small Apple Store, about half the scale size of an average Apple Store.

Our first article is online. It details the installation of a Massoth DCC decoder in our new LGB Amtrak Genesis. It has a number of pictures and thorough, in-depth descriptions of the steps we took to fit our engine with the new decoder.

We have details on plans for an expanded and improved Eric's Auto, including a computer rendition of a new convenience store. This new Eric's Auto would be built on the upcoming new layout.

We also have two news items regarding DCC decoders for our locomotives. Over the weekend we replaced the MRC decoder in our LGB Furka-Oberalp Switcher after it had become inoperative. On Friday, we ordered a Massoth decoder and interface cable for our new LGB Amtrak Genesis. We will post details of the installation.

For a number of years, our LGB Pennsylvania Mogul has been in need of some replacement parts, specifically the smokestack and part of the headlight. The smokestack is not a separate piece. To replace it, the entire front end of the boiler must be replaced. The part of the headlight that needed replacing screws onto the boiler and holds the headlight in place. The headlight currently tilts forward and down. Back in May, we ordered the parts from LGB in Germany, which is currently recovering from a change of ownership from Ernst Paul Lehmann Patentwerk to Marklin. The parts arrived today and we will install them soon. We will post details on the installation process. 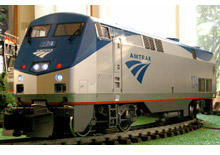 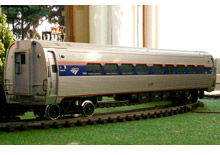 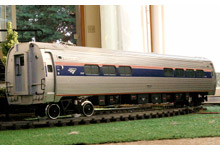 The design of the E&A Trains website has seen some slight tweaking. The site is now wider, with a set column design philosophy. Ad placement is now consistent and we now have a site-wide search engine, accessible from almost every page. You'll also see a new item in our navigation: Articles. Here we'll be posting detailed writings on a variety of topics. A look at our new Amtrak set will be our first. This wider design change has also given us an opportunity to rework some of our pages, most notably the listing of our train movies.

The railroad has a new arrival. We are now the proud owners of LGB's Amtrak rolling stock. Painted in Amtrak's current Phase V livery, we have a GE AMD-103 Genesis diesel locomotive, two Amfleet coaches, and one Amfleet cafe car. These are our longest pieces of rolling stock and the entire train stretches to 10' 3". Rolling Stock Library entries and an intensive, in-depth look at the set are coming soon. 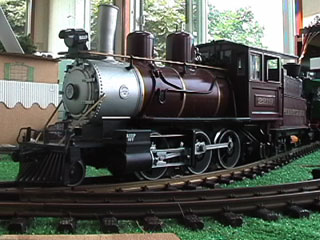 For a number of years, our LGB Pennsylvania Mogul has been in need of some replacement parts, specifically the smokestack and part of the headlight. We had been planning to order them over the summer from LGB of America, but recent news regarding LGBoA and Marklin prompted us to order the parts from LGB in Germany. When they arrive, more information will be posted.

We have added two new links to our Links page. RailServe.com is a large directory of rail-related websites covering many subjects and categories. Railroad Picture Archives is an enormous collection of pictures of real trains and railroads.

Also, as part of our ongoing effort to expand and improve the written content in the Movies and Archive sections of the site, we have added information to the page for the LGB Pennsylvania Mogul. Along with more details of our model, there is also a short history of the prototype and links to pages on this related to the locomotive.

E&A Trains now looks slightly different in places. The headers at the top of each page have been redesigned. They now sport a softer and more subdued look, making for a nicer and less clunky top of each page. Also, the right side of the home page has been redesigned, in an effort to make it look less cluttered and more separate from the main news feed.

Also, as part of our ongoing effort to expand and improve the written content in the Movies and Archive sections of the site, the remaining panoramas now have better and more complete descriptions. They are The Fairgrounds, The Park at Town Plaza, The Platform - Day, The Platform - Night, SERR Tracks, and Town Plaza.

We have uploaded two new movies to the site. Penn Shay features the LGB Pennsylvania Mogul with a passenger train and the Bachmann Shay with a log train. Afternoon Drive is a new version of Midnight Drive, taking an engineer's-eye view around the layout. Both are widescreen and are available in much higher quality than any of our previous movies.

We have added the ability to view items in the Rolling Stock library by brand. Besides just the list, we have included some information about each manufacturer: LGB, Aristo-Craft, and Bachmann. Also, we have clarified the names of many pieces of rolling stock.

We are also slowly enhancing the written content in the Movies and Archive sections of the site. So far, the Turntable, Crossing, and Eric's Auto panoramas have been updated. Besides going into greater detail of what's visible in the panoramas, we have also described the changes in the area since the panorama was taken.

While construction of our new layout is a ways off, we do have some information we'd like to share. The layout will be moving from our enclosed porch to our basement. It will occupy an area of about 40'x15', roughly twice the amount of space it occupies currently. The plan is to have two main loops as we do now, but also to have a few smaller loops, allowing us to run more trains at once. We'd like one of the smaller loops to be specially for the Bachmann Shay, with a prototypical grade up a mountain to a logging operation.

The New Year has brought some railroad updates as we continue to prepare for the complete redesign and reconstruction of our layout. These updates deal with buildings, vehicles, and track placement.

Our Rolling Stock Library has been updated with model numbers for each item. Also, the descriptions for some items as well as for some movies have been revised and crosslinked.

If you follow the model train indsutry, you'll know that LGB, the manufacturer of many of our trains, has been in quite a lot of trouble over the last year. The German company Ernst Paul Lehmann, owner of LGB, filed for insolvency in late 2006, around the same time that LGB of America (LGBoA) was spun off into its own company. LGBoA was the distributor and service provider for LGB products in the United States and was one of the companies that bid on the purchase of Lehmann's assets. However, it lost the final vote to Märklin, another German model train manufacturer. Märklin resumed production in late summer 2007, with the LGB brand intact. However, due to licensing issues with LGBoA, product was distributed to everywhere except the US. Finally, yesterday, on October 5, 2007, an agreement was signed between LGBoA and Märklin that again gives LGBoA exclusive distribution and service rights in the United States.

This is great news not only to us, as we look to the complete redesign of our layout with many possible train purchases, but to the model train industry as a whole. LGB brought the garden railway and G-scale to life, and this prominent and historic competitor will not be lost in the US marketplace.

Today we launched an all new E&A Trains. The site is easier to navigate, has larger pictures, and no longer has any ads. It also has a new address: www.eatrains.net. This is in preperation for an upcoming complete redesign and reconstruction of our layout. Since this will radically change the contents of the Buildings Library, we have not brought that library up to date. This is our first site redesign in almost five years