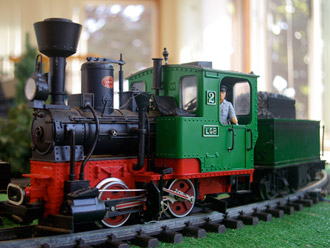 The LGB Stainz was our first locomotive, arriving in 1992 as part of the starter set that started the railroad. That set also included the Orange Flat Car and the Crane Car. Unlike most of our rolling stock, the Stainz is of a European design. It has a wheel arrangement of 0-4-0 and has a much more complicated piston system than the Pennsylvania Mogul does. Though the Stainz is a tank engine, designed to carry its own fuel and water, we at times add a tender. It provides extra power with its on-board motor and gives a better look to a train double-headed by both the Stainz and the Pennsylvania Mogul. The tender was originally all black. We did our best to match the Stainz's green color and gave the tender some paint.

The Stainz does not really run under a road name, though it does have "LGB" written on the sides. It has a headlight, a taillight, and a smoke generator. Due to a lack of space, we had to install the decoder in the cab. The Stainz did not come with a sound unit; we have an LGB Steam Sound Car that we sometimes run behind the Stainz. The only problem we've had with the Stainz is that one of the cabin handles has broken from its bottom hold (as seen in the picture). We have tried gluing back on but have not had much luck in getting it to stay. 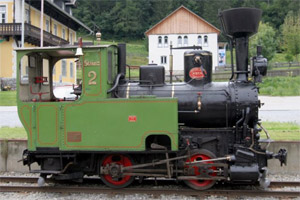 In 1892, the Krauss locomotive works built four small steam locomotives for the railways of Austria's Styrian region. One of these short tank engines, the "Stainz," is the oldest surviving narrow gauge steam locomotive in Austria. This type of steam engine, with four drive wheels but no leading or trailing wheels, was generally used for switching. By the turn of the twentieth century, the 0-4-0 was superseded by a 0-6-0 locomotive due to its better tractive effort.