Many modern model railroads use a system called Digital Command Control, or DCC, to operate each locomotive independently from one another. This replaces the analog DC system where one transformer provides power to the track and only one locomotive could be controlled at a time. In DCC, a command station provides power and a digital signal to the track. That signal provides instructions which are interpreted by a digital decoder in each locomotive. This allows for independent operation. While many locomotives now come with decoders built-in, some do not. Our LGB Amtrak Genesis, which we got in June, 2008, did not come with a decoder, so we had to install one. 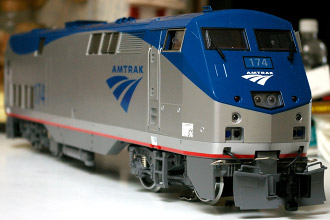 ...with its removable roof segment out.

Our LGB Amtrak Genesis Phase V, model number 22490, was the first locomotive we had purchased in quite a few years. During that time, DCC had really come to the forefront and DCC installation had become either unnecessary or much easier than installation in older locomotives. While the decoder installs in our other engines were complex procedures requiring cutting and soldering wires, the Genesis was simply a plug-in affair. LGB provides a Direct Decoder interface for either plugging in an LGB decoder or easy installation of other manufacturers' decoders. Rather than having to dig through the locomotive searching for, identifying, and splicing wires, the interface presents relevant connections right up front.

To that end, LGB provides a removable roof segment to allow easy access to the locomotive's main circuit board for decoder, sound unit, and smoke generator installation. The segment simply snaps out and back in. However, due to our inexperience with the engine and the LGB Decoder Interface and our desire to investigate the failure of one of the engine's headlights, we elected to entirely remove the engine's shell. We found a large area with plenty of light, cleaned it up, brought in the locomotive, and prepared for surgery. 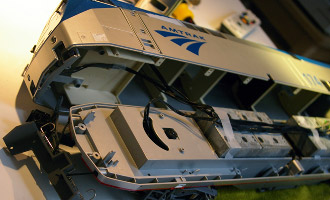 The Genesis with its shell off, looking front to back. 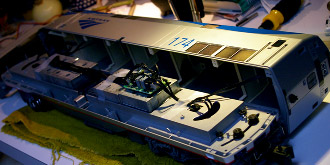 The Genesis with its shell off, looking back to front. 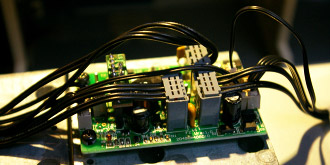 The Genesis' main circuit board.

Taking apart the locomotive proved to be the most tedious part of the decoder installation. First, we had to find a good way of placing and securing the locomotive. Though certainly easier than working on oddly shaped steam engines, working on the boxish Genesis still calls for caution as it certainly has its fair share of fragile plastic parts, notably the mirrors on the sides. First, we laid down a soft towel. Also, since the locomotive would have to be on its top or its side for us to reach the screws on the bottom, we used books to lift the engine by supporting its center in order to protect the mirrors on the sides and the horns on the roof.

On the underside of the Genesis, there are in total twenty screws holding the shell to the chassis. Four of the twenty secure the cowling. It was necessary to remove the cowling so we could reach two of the remaining sixteen screws. All twenty screws are the same size and have Phillips heads. Many of the screws, particularly the two on either side of the front truck, were very difficult to reach. Once the screws were out, the shell easily, and quite suddenly, came off. 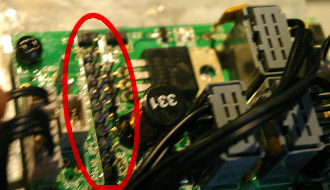 The main circuit board without the jumper. The revealed poles are circled. 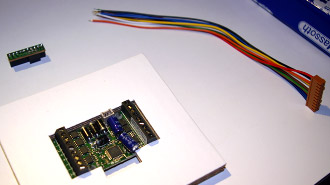 Various components involved in the installation: from left, the jumper removed from the circuit board, the decoder, and the interface cable. 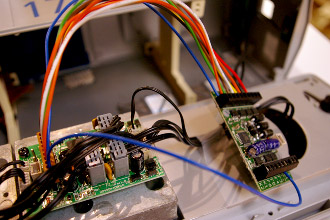 The decoder after being plugged in to the circuit board. 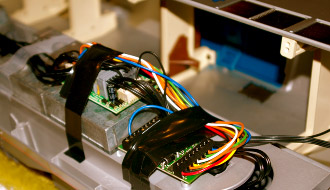 The decoder completely installed after being taped down with electrical tape.

Preparing the main circuit board for installation of the decoder was very simple. After moving the various wires out of the way, we simply had to unplug the jumper from the board. Doing so revealed where to plug in the decoder.

The Genesis was designed to accept LGB's 55027 Type 3 MTS Decoder. While designed to be operated with LGB's Multi-Train System, the decoder is fully compatible with NMRA DCC standards. However, after LGB became insolvent and was purchased by Marklin in 2007, Marklin and LGB of America were unable to come to a North American distribution agreement. By the time we were in the market for LGB's decoder in mid-2008, product had not entered the country for quite a while and, despite our extensive search, we couldn't find an LGB decoder.

So, we went with the next best thing. Massoth, a German electronics company, has provided electronics to LGB for decades, including MTS components. Massoth has their own line of DCC products and we purchased the 8150001 eMOTION XL 3 Amp Loco Decoder, their equivalent to the LGB Type 3 Decoder, and the 8150501 eMOTION DCC Interface Cable, which has a plug identical to the LGB decoder and mates with the Genesis' main circuit board just as easily.

First, we attached the interface cable to the decoder. This also proved very simple. Since Massoth also designed the electronics in the locomotive, there was a one-to-one correlation between the poles on the board, the wires in the interface cable, and the ports on the decoder. We simply inserted the pre-stripped wires into the appropriate place on the decoder and screwed down the screws. Then we plugged the cable into the circuit board. This was a much more snug fit than the jumper and required some cajoling. Even then it was not a very secure connection and the cable easily unseated itself.

To finish the installation, we secured the cable to the board and the decoder to the chassis using electrical tape. We then reattached the shell to the chassis. This was just as tedious as removing it. Having gone through the installation, we probably could've performed it without taking off the shell, instead using the removable roof segment. The decoder has performed perfectly since we installed it and it works well with our MRC Command 2000 system.