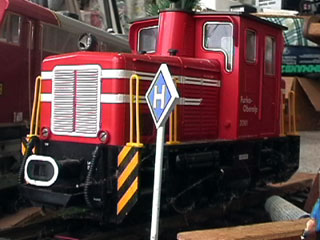 The Furka-Oberalp Tm 2/2 switcher may be small but it is a major asset to the railroad. Its small design makes it perfect either for yard work and shunting or for pulling short trains to nearby stations. It is powered by one motor and packs quite a punch. The locomotive has directional head and taillights, though not as many as the prototype. The detailed cab with an engineer figure is also lit. The engine is painted in a now-obsolete Furka-Oberalp livery and wears number 2061. Its red color and bright yellow warning markers make the locomotive highly visible, especially important in a yard where safety is of the highest importance.

We have installed an MRC DCC decoder in the switcher, hiding it inside the front engine compartment. While we usually have the locomotive working in the yard, it sometimes pulls short freight or maintenance trains. We've only had minor problems with the switcher. The headlight has burned out, but it was easily replaced. Also, the yellow handrails are made of soft plastic and bend easily. The Furka-Oberalp-Bahn is a narrow gauge mountain railway in Switzerland. It runs a variety of locomotives powered by both diesel engines and overhead electrical catenary wires. The railroad first opened in 1910 and has been expanded multiple times since. The line uses a gauge of 1,000mm (about 3.28'), compared to the 1435mm (about 4.7') standard gauge. On Janurary 1, 2003, the Furka-Oberalp-Bahn merged with fellow Swiss narrow gauge railway BVZ Zermatt-Bahn to form the Matterhorn-Gotthard-Bahn. One of railroad's most famous trains is the Glacier Express, a 7.5-hour scenic trip through the Alps.

Night Train
Tunnel
From The Archive