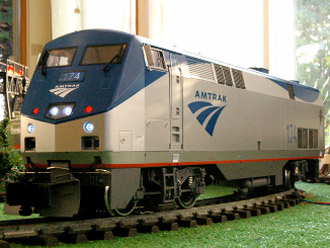 The LGB Amtrak Genesis arrived at the railroad in June, 2008, along with two of LGB's Amfleet coaches and one of their Amfleet cafe cars. It is almost two-and-a-half feet long and is our longest piece of rolling stock. The Genesis rides on two four-wheel trucks, each with a motor. Its exterior is painted in Amtrak's current Phase V livery and wears number 174. Also found on the highly detailed exterior are quite a few very bright LED lights. Opening doors lead into the cab, which is also very detailed with an engineer, controls, and light-up control screens. Three non-opening doors are found on the opposite end of the locomotive, one on the rear and one right around each corner on the sides. Each door has a window and, while there is no prototypical interior, the ambient light from the rear LEDs provides a nice bluish glow.

The Genesis, like the Amfleets, came equipped with knuckle couplers instead of the hook-and-loop couplers found on most LGB products and on most of our rolling stock. The engine and the Amfleets included hook-and-looks replacements. We've swapped out only one coupler at the end of one of the Amfleets. So far, the engine has run very well. We installed a 3 amp Massoth 8150001 eMotion XL decoder. We have encountered two problems with it. One of the center headlights went out not long after we started running the locomotive. We contacted LGB and they sent us a replacement headlight under warranty which was fairly simple to install. The second problem has to do with the spring-loaded cab doors. The left side door doesn't always completely close, instead hitting the wall. Nudging the door via the indented door handle area generally releases it. 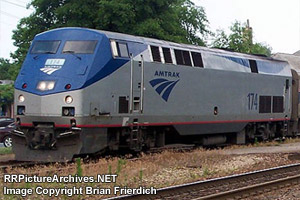 Between 1992 and 2001, GE built 322 Genesis locomotives. Besides 296 for Amtrak, 32 were built for New York's MTA Metro-North Railroad and 21 for Canada's VIA Rail. They were designed and built in response to Amtrak's need for a new passenger locomotive to replace the aging GM-EMD F40PH. Stronger, shorter, and more powerful, the Genesis can reach a top speed of 110 mph. Three models of the Genesis were made: the P42DC replaced the P40DC in 1995 while the P32AC-DM could be run run by either the onboard diesel engine or from a powered third rail. The Genesis was first known as the AMD-103 (for AMtrak Diesel - 103MPH) and officially designated by GE as the Dash 8-40BP. The GE Genesis is 70 feet long, 14 feet 8 inches tall, weighs up to 268,240 pounds, and can carry 2,200 gallons of fuel. The Genesis is Amtrak's primary locomotive and can be found across the United States.