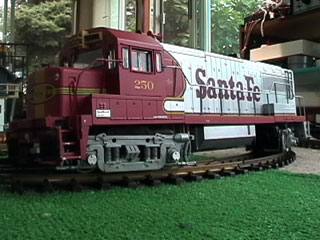 The Aristocraft Santa Fe GE U25B, number 250, is a big and powerful engine. With two can motors, one in each truck, it can quickly pull a long and heavy train with little effort. It has directional headlights and taillights, lit number boards, and a lit interior. It is also quite detailed, both inside and out. We have installed an MRC decoder to work with our DCC system. We also installed a sound unit, though it is fairly crude so we don't have it on very often. The locomotive has a knuckle coupler on its rear end, limiting the amount of our rolling stock that we can use with it. Consequently, we tend to only use this engine with freight trains led by the Western Maryland Boxcar, which has a knuckle on one end.

We do have a few issues with the U25B. Its large size means it doesn't run well on our small R1 two-foot radius curves. It runs, but it can hit things that are too close to the track, its couplers won't work perfectly, and it simply just doesn't look right due to the large overhang. Our new layout will make extensive use of R3 four-foot radius curves, hopefully alleviating this problem. Also, the smoke unit has died and it is difficult to get inside to replace it. Finally, the railings are very flimsy, and can break, bend, or fall off without very much force. 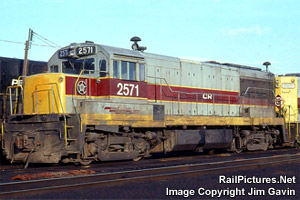 General Electric built 478 U25Bs between April, 2959, and February, 1966. Nicknamed U-boat, the U25B was GE's first independent domestic road locomotive since 1936. Between 1940 and 1953, GE worked with the American Locomotive Company (ALCO) to jointly design, produce, and market diesel locomotives. The U25B produced 2,500 horsepower and was also the highest-horsepower four-axle diesel road locomotive in the U.S. at the time of its introduction. Today, only one U-boat is in operating condition. Southern Pacific 3100 is now on permanent exhibit at the Orange Empire Railway Museum in Perris, California.
From The Archive