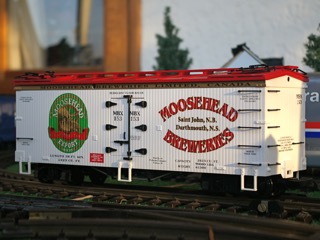 Moosehead is Canada's oldest independent Brewery. Founded in 1867 by Susannah Oland, Moosehead has been family-owned and -operated for six generations. In addition to brewing its own lagers and ales, Moosehead handles Canadian distribution for brands such as Samuel Adams. Headquartered in Saint John, New Brunswick, Moosehead's products are distributed in Canada and the United States and around the world.

This USA Trains model carries the Moosehead livery and comes finely detailed. The refrigerator car's side doors and roof hatches open and it comes with separate handrails and footholds. The car comes preinstalled with hook-and-loop couplers but separate knuckle couplers are provided; we've left the hook-and-loops for compatibility with most of our rolling stock.
From The Archive