Inside the Renovated Apple Store

Since early 2002, our layout has had an Apple Store. Originally a crude cardboard building with a garish blue color, the store was completely redone in May, 2004. The new structure was made from painted balsa wood with a cardboard roof and had a lit Apple logo on the front. The one holdover from the original building was the depiction of the store's interior: a black-and-white print out of a picture taken from the front of a real store. In August and December, 2008, a third upgrade of the store brought a rehabilitated structure and a complete interior. 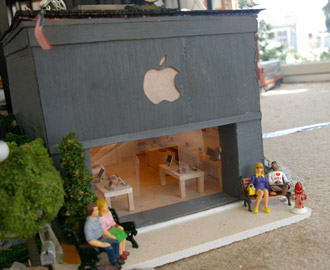 The renovated Apple Store with a new stone tile base and asphalt shingle roof. 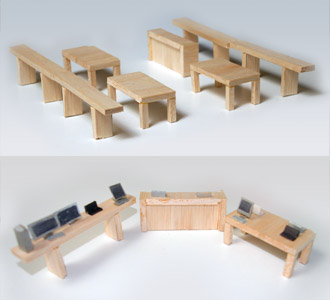 The Apple Store's tables, computers, and peripherals are made from balsa wood.

The first phase of the renovation involved securing and stabilizing the store's structure. Previously, the store had sat directly on a surface and, after four years, the glue had lost some strength and the walls were no longer square. We salvaged two stone tiles and used them as a base. After aligning the walls we attached the building to the base with caulk. We also used caulk to secure the walls to each other and as a general adhesive for certain parts of the project. The result was an immensely more stable building. We also replaced the ragged cardboard roof with one made of asphalt shingles. We cut a hole in the new roof to allow light from within the store to exit through the skylight.

The second phase was the construction of the store's interior. Planning began with a 3D computer model of the store made from precise measurements of the existing structure (a July, 2008, news article about this planning stage is located here). Once completed, these plans were used to construct the furniture, make signage, and arrange the interior elements.

Almost the entire interior was made from balsa wood. The walls were thin sheets of balsa painted white. The tables were made from thicker sheets and from sticks. Here, the balsa was left in its natural color. After cutting the pieces to size, they were fastened with wood glue. The computers and peripherals were cut from thin balsa sheets and painted white, black, or gray to match the real device represented. In particular, the iMacs and displays were tricky because these both have L-shaped stands from which the devices hang. When they were dry, the computers and peripherals were glued to the tables. The computers' screens were drawn with black ink. The cabinet contents were drawn with ink and marker. The signage lining the walls of the store was created on our computer, printed out, and taped on. The ceiling was made from a sheet of card stock, illustrated with pencil, and strengthened with balsa sticks. Holes were cut in the ceiling for the lights. 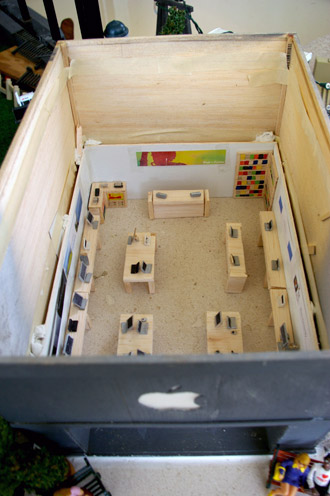 The interior of the Apple Store with the ceiling removed.

The interior of our Apple Store is set up very similar to the real thing, though our store is fairly small. An average Apple Store of this type would probably be around 33% longer and a little wider. In addition, our store has only the showroom; there is no restroom, stockroom, repair area, or office space depicted. It could all be on the second floor, but then one might ask where the stairs are.

Looking from the front of the store to the back, the first row and the left half of the second row have tables of computers and peripherals such as iPods and iPhones. The banners on the walls advertise the Mac Pro, the iPod family, and the use of family photos. The right half of the second row is the store's Genius Bar where customers receive technical support. The wall table is the same as the other three in the store, but in place of a full floor table there is a taller, shallower counter. The wall banner has the Genius Bar logo and representations of LCD screens. The third row has, from left to right, a cabinet for larger peripherals such as printers, a check-out counter with an iPod ad banner above it, and software shelves. 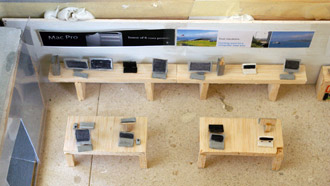 The right-hand side of the store. 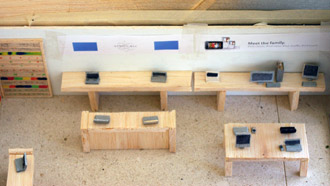 The left-hand side of the store. 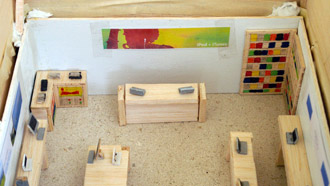 The rear of the store. 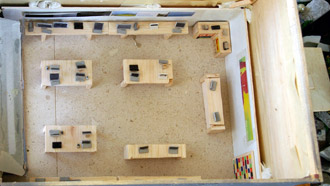 The store from above. 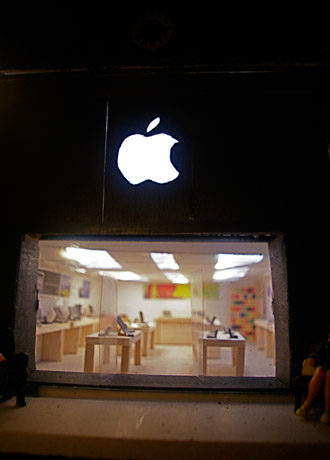 The renovated Apple Store at night.

Our store's ceiling is also prototypical. It has fairly accurate visual details and lighting "fixtures." The light, as of now, is provided by strings of Christmas lights placed above the ceiling. This setup is far from finalized. We have tried a variety of lights. Incandescent bulbs are bright and yellow, white LEDs are fairly bright and bluish, while the warm white LEDs we tried were dim but with a nice color. Right now, we are using both an incandescent string and a white LED string. It gives a bright light with a nice color, not too yellow or too blue. What still concerns us is the heat produced by the incandescent lights, so we're pursuing a completely LED solution.

We're quite happy with the third major version of our Apple Store. Not only have we greatly enhanced one of our favorite buildings, we have really honed our skills. We will surely put them to use in the future as we strive for more detail and greater realism in our new layout. 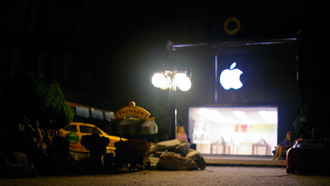 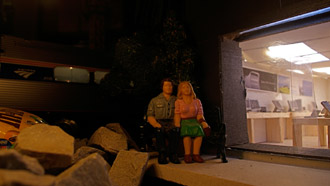 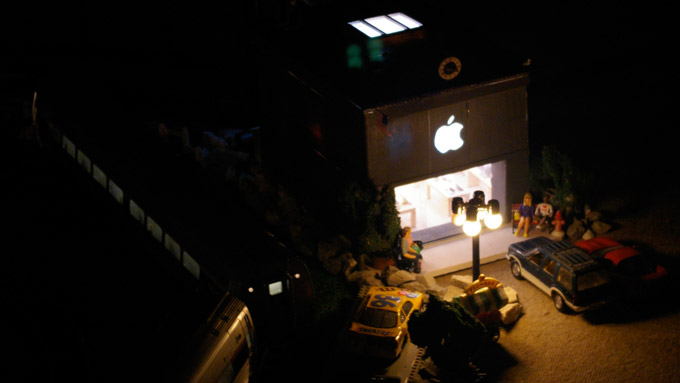