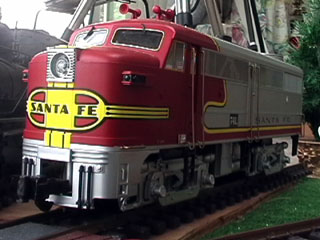 The Aristocraft Santa Fe ALCO FA-1, which arrived in December, 2001, is a very powerful locomotive. Like the Santa Fe GE U25-B, the FA-1 has two can motors, one in each truck. However, unlike the GE U25-B, this engine is more like the size of our other locomotives and runs very well on our small radius curves. The locomotive has a variety of lights, including a headlight, lit cab interior, and lit number boards. There is even a light in the engine compartment, revealing a model engine. The locomotive also has a smoke unit and fan. The engine's functions may be individually enabled or disabled via switches on the back. The locomotive is numbered 74L and wears the Atchison, Topeka and Santa Fe Railway's famous Warbonnet livery.

Though the FA-1's paint scheme identifies it as a passenger locomotive, we mainly use it for freight trains because its knuckle coupler almost requires us to run our Aristocraft 40' Western Maryland Steel Boxcar right behind it. However, we have also had success coupling the engine with our LGB Amtrak Amfleets, which have LGB's knuckle couplers. While the mating between the two isn't seamless, once they were coupled we had no problems. Aside from a burnt-out smoke unit, we haven't encountered any problems with the FA-1. 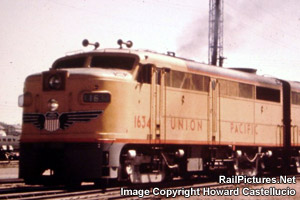 A product of a partnership between the American Locomotive Company (ALCO) and General Electric (GE), the FA-1 was produced between January 1946 and October 1950. With 1,500 hp and a top speed of 65 mph, hundreds of FA-1s and the the cabless FB-1 booster units were sold to railroads including the New York Central and Union Pacific. The FAs shared styling and components with ALCO's PA line, a more powerful locomotive built around the same time as the FAs. Neither locomotive, however, could lessen the dominance of General Motors Electro-Motive Division. ALCO halted its manufacture of locomotives in 1969.