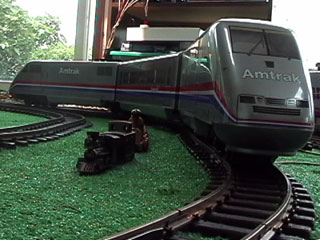 The LGB Amtrak trainset is one of the few representations of modern high-speed passenger rail travel in large scale. This set has one passenger car sandwiched between two end units, though it is powered by only one motor. However, that one motor can fly down the track at incredible speed due to the train being basically nothing but an empty plastic shell. That lack of detail is one of our biggest disappointments with the trainset. There are no windows or interior furnishings, no doors, vents, or even included directional lights. Everything's a sticker and it looks pretty tacky compared to pretty much any other LGB equipment.

Over time, we have enhanced the capabilities of our Amtrak trainset. We installed a digital decoder for use with our DCC command system. We also installed our own headlights and taillights, lit by track power. What we have not done is added additional cars. LGB offered additional coaches and a dining car, but all were too expensive. This presents another limitation of the trainset: there are no couplers to be found, so the set cannot be used with anything other than itself. The elements of the trainset are also relatively long; though it handles tight curves just fine, it hits trackside objects easily. Other than these inherent issues, we have not run into any problems with the Amtrak trainset. 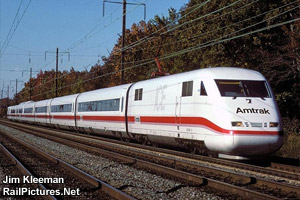 In reality, the Amtrak trainset is an ICE (InterCity Express) 1, the first of Germany's high-speed trains. Sixty of these trainsets were built between 1989 and 1993, and can reach speeds of 174 miles per hour. With two power cars and twelve intermediate cars, these trainsets can carry 743 passengers. In 1993, a shorter, slightly modified trainset was shipped to North America for both national display tours and for commercial runs on the Northeast Corridor. While the LGB model sports Amtrak's then-current livery with a gray body and red, white, and blue stripes, the prototype carries the livery of the original Deutsche Bahn trainsets, with a white body and red and gray stripes; only an Amtrak logotype was added to the train's nose. Though the trainsets were well received, a contract for Amtrak's own ICE trainsets never materialized, and it wasn't until 2000 that the Acela Express brought permanent high-speed travel to the United States.
From The Archive