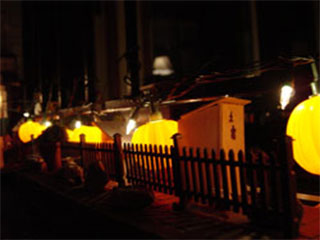 The second annual SpookFest was another huge success. Put up October 29th and taken down November 2nd, this year's SpookFest beat last years in terms of attendance and features. Just like last year's, SpookFest featured giant lit pumpkins along the path of the Park at Town Plaza. A haunted E&A Express Deluxe took passengers around a spooky trail of Halloween. Candy was handed out at the Park and on the train. A SpookFest '03 is already in the works, and hopefully this successful tradition will keep on going.