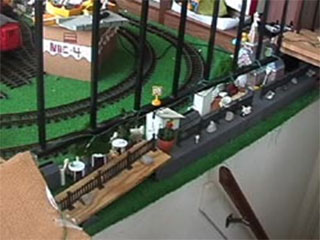 Many elements of the park have stayed the same, but this revision has also added many others. The biggest is the addition of the park's own building. The building was built in the 1800's and was used as a church, but now it will act as visitors center to the park, Town Plaza, and the railroad. Inside, you'll find maps, brochures, and refreshments. This brick building brings charecter and charm to the Park at Town Plaza. The outside has also had many changes. The two lane walkway is still there, but it has been moved and slightly rearranged. The ramp leading up to it has been converted into wood, and the brick walkway has been moved to serve as a floor for one of the two courtyards. This one is located next to the ramp and features two trees, three tables, and other small things. The other courtyard is in front of the church and next to the walkway. It has one tree, a bench, stairs to and from the walkway, and other small things. Two porta-potties serve the Park at Town Plaza. One is in the Visitors Center's courtyard and the other is inbetween the two courtyards. The only thing that's new at the Park at Town Plaza is the building. It is a Puzz 3D that we built couldn't find a place for it at the railroad. Then we redid the park so it would fit. Everthing else was at the Park at Town Plaza previously, except for a few things that brought from the courtyard that was next to the Apple Store.