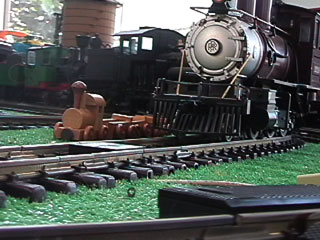 This celebration of Pennsylvania Railroad's steam locomotives was celebrated last weekend. Its major feature was continuous runs of a train pulled by the Pennsylvania engine, the green switcher, and the Shay. The train itself consisted of the E&A Private Car, the four coaches, the day car, the State of Maine boxcar, and the caboose. The train went around the railroad and each run lasted about five minutes. The trains ran all day. SERR School also contributed to the event. They hosted an exhibit about steam locomotives and technology on many railroads. It covered everything from the first engine to the newest, cleanest, most technologically advanced locomotives at Pennsylvania Railroad. This is the third Steam Live, and a Steam Live 2003 is being planned.