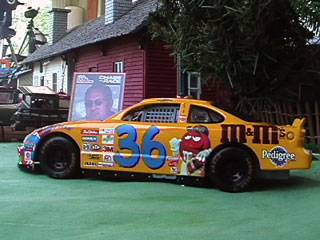 NASCAR recently donated a racecar that is on permanent display at the Fairgrounds. It is Ken Schrader's #36 Pontiac Grand Prix. Since NASCAR is receiving its 2003 cars, it needed to get rid off the 2002's and found LLFG. The sign behind the car has a picture of Ken Schrader and information on him and his car. No one can touch the car, but can get very close to it. The exhibit has received high praise and has been visited by many people. Regular LLFG exhibits will not be affected by the racecar.