A rendition of the new main building of the new Eric's Auto, featuring a convenience store.
Eric's Auto is the railroad's gas station, car wash, and auto repair center. When we build our new layout, it will be given a large and extensive expansion. One of the biggest is imagined above. This new building will replace the current structure, a Pola model of the the Cherry Hill Junction at the Strasburg Rail Road, a heritage railroad in Strasburg, Pennsylvania.

A rendition of the new main Eric's Auto sign. 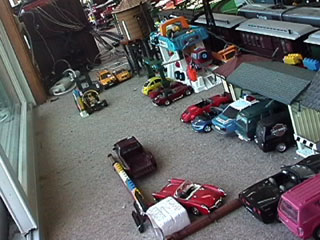 The current Eric's Auto, sans the latest repaints.
This new building will add a convenience store to Eric's Auto, offering food, coffee, periodicals, etc. It would also house some, though not necessarily all, Eric's Auto offices. Separate offices and customer areas for certain services may be located within those services' buildings. We intend to add a detailed interior to the new convenience store using LEDs to light it. It would have a cashier counter, product isles, and other service areas. We also want to illuminate the sign on the front. The exact size and design of the new building have not been nailed down; the computer rendering above shows what we hope it will look like. Like our other home-built structures, the Apple Store and Fred's Cafe, we will likely build it out of balsa wood.

This new convenience store is only part of the major improvements coming to Eric's Auto. It will be given a visual update, as seen by the sign to the left. This branding will also be seen on other buildings. Eric's Auto will also expand to include to a large body shop. This will be the old Food Lion/Sears building. Finally, we will build new gas pumps to replace the rickety structure made of Lego bricks. We hope to put a roof over the pumps with LED lighting. We have already added a third tow truck and cleaned and painted the current car wash structure.

Hopefully we will be able to put together this new building, along with the rest of the improved Eric's Auto and the new layout, this summer. We will post details on its construction. While we have these plans, not many details are known. We don't know how big it will be. The current Eric's Auto is around twelve square feet, but it still feels cramped. We have to have even more buildings and cars at the new Eric's Auto. And all of those cars will be in scale. In some ways, our plans for the new Eric's Auto represent our basic plans for our new layout: bigger and more realistic. The new layout will feature no marker-on-cardboard-box buildings. Track will be ballasted. LEDs will let us add more and more realistic lighting, inside structures and out. As work progresses, we will, of course, keep the site updated with new information, news, pictures, and articles.
From The Archive