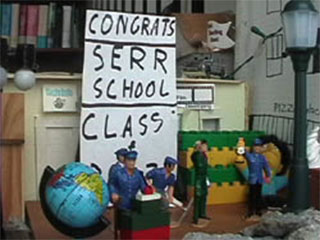 The School of Engineering and Railroad's Class of 2002 graduated last weekend. The graduation started at SERR School. From there, Amtrak took the graduates to the Fairgrounds. There, speeches were given, awards were handed out, and the graduates received their diplomas. After the ceremony, the graduates and others proceeded to The Park at Town Plaza for a reception. It was catered by Fred's Cafe. This is SERR School's third year. The school's mission is to prepare students for jobs at the railroad. There are separate departments for each division of the railroad, such as Operations, Maintenance, and Financial. Close to or on campus is a radio broadcast station, a television broadcast station, a hardware store, a lumber yard, an automotive shop, and many stores. Its location at the railroad also helps students. Almost all of the graduates go on to the railroad. All of the students in the Class of 2002 graduated with a B average or higher.