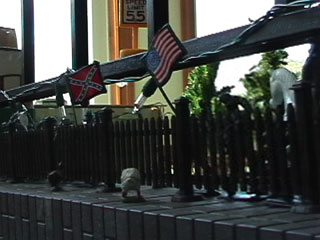 Located at The Park at Town Plaza, the Civil War 2002 exhibit stood as a tribute to the Civil War. Fiberglass soldiers and canons made up the exhibit. It took up one of the "lanes" on the walking platform at the park. Both the Union and the Confederates were represented with a flag, soldiers, and a canon for each. However, Civil War 2002 does not represent a particular battle. Admission was $20.99. The exhibit lasted between May 18 to 25. Attendance was above expectations, and Civil War 2003 is already in the works. Civil War 2002 is a traveling exhibit and its next stop is New York City.