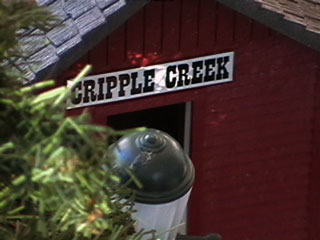 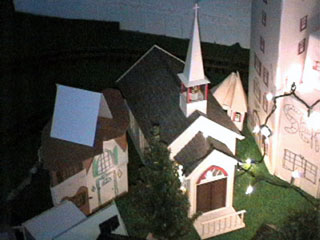 The Railroad just received a huge amount of track and supplies that will hopefully be used in a future layout. Included are large radius curves and straight track. The straight track is three feet long per section and the curved track is most likely eight feet in diameter. These big curves are used for large locomotives or cars that cannot operate well or at all on the smaller diameter track. There is also other kinds of track and one switch. We have received about the equivalent of two large RubberMaid containers. Most of the track is sitting in our basement. We have used some of the track for another siding. Also received were three bridges, four street lamps, and two crossing signals. The bridges and crossing signals are not being used, but the street lamps have been placed at The Park at Town Plaza. Other things include a porta-pottie, a lumber wagon, bridge supports, and fences. The bridge supports and the fences have also been placed at The Park at Town Plaza. Two buildings have also been received. A new station, called Cripple Creek, has been placed next to the old one. It will act as the freight station while the old station will act as the passenger station. Cripple Creek is identical to the old station except it is red and doesn't have any signs. We also received a church that has been placed at SERR School. It is white, has red trim, brown doors, and a gray, shingled roof. It is complete with a steeple and a section of railing in front of the door.