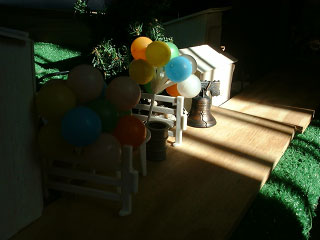 Town Plaza was just redone last weekend. It has been confined to walking and biking traffic only. The parking lot along the strip of land behind Cardinal Condos was turned into a biking trail and a park. The name is still under consideration. The trail is made out of fake brick and is divided into two lanes by rocks. At the end of the trail is a small park with a picnic table. The entire park is wonderfully landscaped with rocks and trees. Also, tiling has been put on top of some of the concrete (carpet) to act as nicer paving material. It has been put next to The Socialist, the Food Lion and The Apple Store sidewalk, and outside Subway. The stairs outside The Apple Store have been decorated with rocks surrounding their base. An antique and, not to mention, falling apart, truck has been placed outside Subway. Finally, the entrance to PRR Inn has been enhanced with a wood walkway with rocks on either side. We hope this new design will stay with us awhile.